Scouting Ireland (Gasóga na hÉireann) is the sole World Organization of the Scout Movement-recognised Scouting association in the Republic of Ireland; in Northern Ireland it operates alongside The Scout Association of the UK. Scouting Ireland is a voluntary, non-formal educational movement for young people. It is independent, non-political, open to all without distinction of origin, race, creed, sexual orientation, spiritual belief or gender, in accordance with the purpose, principles and method conceived by Lord Baden-Powell and as stated by WOSM.<ref name="merger"/>

The association is headed by the Chief Scout, currently Christy McCann, supported by the National Management Committee and Chief Executive Officer, John Lawlor. 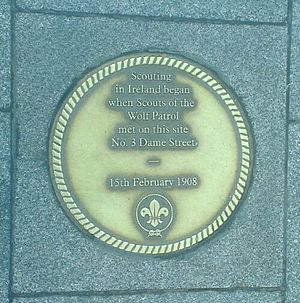 Plaque at 3 Dame Street which marks the site of the 1st Scout meeting in Ireland.

By 1908, the influence of Baden-Powell's Scout Movement had spread from Great Britain to Ireland. The first recorded meeting of Scouts in Ireland took place at the home of Richard P. Fortune, a Royal Naval Volunteer Reservist, at 3 Dame Street, Dublin on 15 February 1908 where four boys were enrolled in the Wolf Patrol of the 1st Dublin Troop. The earliest known Scouting event in Ireland took place in the Phoenix Park in 1908 with members of the Dublin City Boy Scouts (later Scouting Ireland S.A.I.) taking part.

Because of the impacts to available adult leadership, the coming of the Great War in 1914 could have affected the viability of Scouting in Ireland. However, patrol leader members took over much of the leadership activities when adult leaders volunteered for active military duty.Template:Citation needed Scouts contributed to the war effort in several ways; notably the Sea Scouts, who supported regular coast guardsmen.Template:Citation needed

In Dublin in the 1920s, two Roman Catholic priests, Fathers Tom and Ernest Farrell, followed the progress of Scouting. They noted that in other countries, the Catholic Church had taken up the idea of Scouting as a means of imprinting a Catholic ethos on young people. After some study and experimentation, they made a proposal to the Catholic Hierarchy of Ireland and were granted a constitution and Episcopal patronage in November 1926. Thus, the Catholic Boy Scouts of Ireland (CBSI) (Gasóga Catoilici na hÉireann) was created. CBSI would later become the largest Scout association on the island.

When war came again in 1939, Scouts carried on under the direction of their patrol leaders, and undertook service tasks. Including acting as messengers, fire watchers, stretcher bearers, salvage collectors, etc.Template:Citation needed

In 1965, CBSI joined with SAI to form the Federation of Irish Scout Associations, FISA. Through FISA, Irish Scouts were able to play a full part in international Scouting. Prior to this, because the World Organisation of the Scout Movement (WOSM) traditionally recognises only one Scouting body in each country, only SAI had been recognised by WOSM (since 1949).<ref name="stats">Template:Cite web</ref> Similarly, the Northern Irish Scout Council (NISC) had observer status in the Federation, as CBSI's membership extended across the 32 counties on the island of Ireland and WOSM usually only recognises associations that observe political boundaries.

Although aligned through FISA, these two separate Scouting organisations (SAI and the much larger CBSI) operated as separate entities through the latter half of the 20th century. Then, on 1 January 2004, the two organisations were merged to form 'Scouting Ireland'. This followed votes in May 2003, when both associations agreed to join together to form a new single association. This in turn had followed from decisions in 1998 to set this process in motion.<ref name="merge">Template:Cite web</ref> <ref>Template:Cite news</ref>

Local volunteers working in Scout Groups and Scout Counties and also various national teams are supported by a centralised full-time (professional) staff, who support the day-to-day running of the association.

Scouting Ireland offers a programme for youth members ages between 6 and 25 years.<ref>Template:Cite web</ref>

The National Management Committee can decide on variations to the Section names for use with a specific Symbolic Framework adopted by a Scout Group Council.

The basic unit of Scouting in Ireland is the Scout Group. Each Group is based around a single meeting point, but may have a number of sections, meeting at different times, and may have more than one Scout Troop or Cub Scout Pack, for example. The Group is coordinated by the Group Council, headed up by the Group Leader. Membership includes various Group appointments (like Secretary and Treasurer), adult representatives of all sections and youth representatives of the Scouts, Venture Scout and Rover Scout sections.

Scout Groups are members of their local Scout County. Some are based on geographical counties, others, depending on density, are based in parts of cities or across county boundaries. The Scout County supports the training of Scouters, the youth programme and the development of Groups within the County. The Scout County Board, which meets at least once a year, consists of representatives of each Scout Group, elected youth representatives of the Scouts, Venture Scout and Rover Scout sections and holders of various County appointments (County Commissioner, County Secretary, County Treasurer) as well as County Programme and Training Co-ordinators.

The Scout County Management Committee consists of the Group Leaders, holders of the various County appointments.

Each Province has a Provincial Support Officer and a Group Facilitating Officer who administrate the development of Training and Youth Programme.

The primary decision making body of Scouting Ireland is National Council, which meets at least once a year. Membership consists of members of the National Management Committee, youth and adult representatives of each Scout Group in the country, and the National Youth Representatives as well as the holders of some County appointments. National Council is the vehicle for amendments to the movement's Rules and its Constitution. It also elects the members of the National Management Committee.

A National Youth Forum is held each year with representatives from the Scout, Venture Scout and Rover Scout sections. Representatives debate motions relating to the running of the association and their own sections. Successful motions are carried forward to the relevant national bodies, even National Council. Each forum elects 9 representatives who then represent the interests of youth members on various committees throughout their term of office (one year). 3 ordinary members of the National Management Committee must also be under the age of 26 on the day of election.

In 2014, Scouting Ireland won the bid to host the 16th World Scout Moot an international Jamboree style event for Rover Scouts, which is due to take place in the summer of 2021.

In January 2016, Scouting Ireland signed a Memorandum of Understanding with the Lesotho Scouts Association.<ref>Template:Cite web</ref> The countries will participate in a partnership called Lumela-Fáilte, based on intercultural sharing. The partnership has been in progress since 2010, with Scouting Ireland supporting two Basotho Rover Scouts to attend the 2015 World Scout Jamboree.

The "Star Scout Show" is where members of Scouting Ireland perform acts of different kinds on stage. It usually takes place in Saint Patrick's College, Dublin. There is a song written especially for the show by Paul Redmond called "We Carry the Light". The show, performing to capacity audiences over three days, features a wide range of acts with music, dancing, drama and comedy, performed by Scouting Ireland Members of all ages and from several locations around Ireland, together with a strong representation from Dublin.<ref>National Star Scout Show</ref>